↑
This post was requested by my younger sister, who is half my size, twice as pretty, and who loves ducks. She thinks they are the shiznit in all their adorable fluffy splendor, but I daresay she loves them most when they are plucked, deboned, roasted and served up on a platter like this. 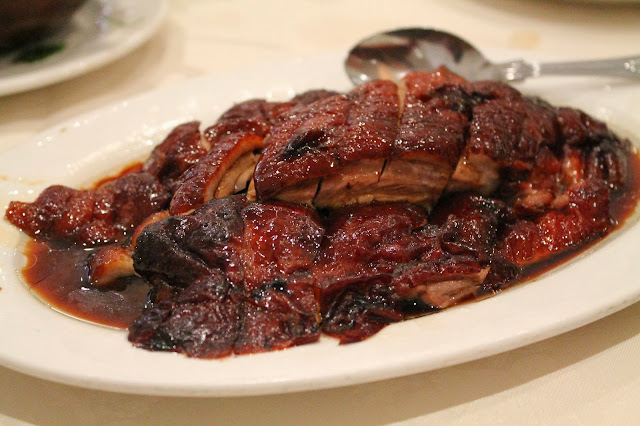 I know a lot of my friends love Peking Duck but I MUCH prefer Cantonese roast duck, which is what this is. The skin isn’t crispy but it’s not flaccid or chewy in the least. It’s fatty and unctuous and the meat is tender and juicy and so, so flavorful. And if there’s one thing that London is great for, it’s roast duck. And if there’s one place that does amazing roast duck, it’s Gold Mine.

On this particular occasion, I brought my friends H and E, because I’d promised them previously that I would take them to my favorite Chinese restaurant. M was supposed to come but didn’t in the end because he was home battling a monster of a hangover. But judging by how much H and E LOVED the food, M, you seriously missed out!!!!!!!!!!!!!

I daresay most Chinese living in London have been to, or at least know of Gold Mine, and most of them would share my passion for their roast duck. But I also know that some people prefer the roast duck at Four Seasons. To my mind, both are delicious, but I prefer the one at Gold Mine because I find the one at Four Seasons “gratuitously fatty” (two words which I’m sure you never thought you would hear leave my lips hahaha). Having said that, because I haven’t got THAT much integrity, I would never dream of saying no to the roast duck at Four Seasons.
The cabbage that the duck rests on is DELICIOUS because it’s soaked up all the fat and oil and sauce so make sure you eat it, then you can call home to your momma and tell her you’ve had your 5-a-day. But you may want to leave out the part about the duck. I know MY mom had warned me to go slow on the duck because it really was making me fat when I first moved to London. But that’s probably because I was having it literally a few times a week.
And if you’re the sort to take off the skin and fat… Please don’t let me know or I can never look at you the same way again.
Finally, remember to get the duck “off the bone”!!!!! They usually ask you anyway.

Besides the duck, there are a few other dishes that have firmly cemented Gold Mine’s status as my favorite Chinese restaurant in London. 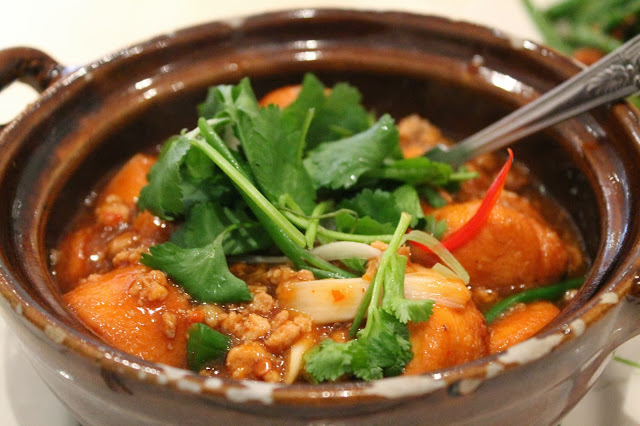 This here is the “Japanese tofu”. It’s egg tofu (tofu that has egg added to it so it’s slightly yellow in color and also more flavorful than the silken variety) that has been fried and then braised with minced pork in a claypot. A lot of my non-Asian friends tell me they hate tofu, but it’s only because they’ve never had tofu the way it’s meant to be had, this being one of them. This dish has changed the mind of a lot of my non-Asian friends, who never thought tofu could be so tasty. It’s obviously not the healthiest way of eating tofu but it sure is delicious.

I also love this: 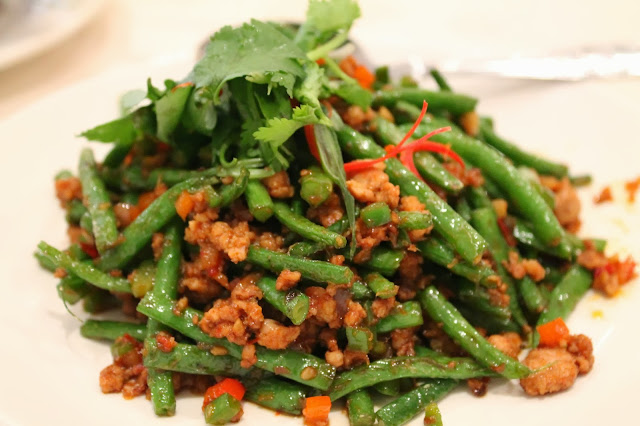 These long beans are deep-fried beforehand so they have the perfect level of doneness – not too mushy, not too crunchy – and HELLOOOOOO, it’s loaded up with minced pork yet again!!!!!

*For both the Japanese tofu and French beans, you can ask them to use another type of meat, like minced beef, if you don’t eat pork.

Another dish I usually get when I go is the crispy squid. I don’t remember the price because we didn’t get it on this particular occasion but it’s so good. Let me just entice you with an old picture of it. 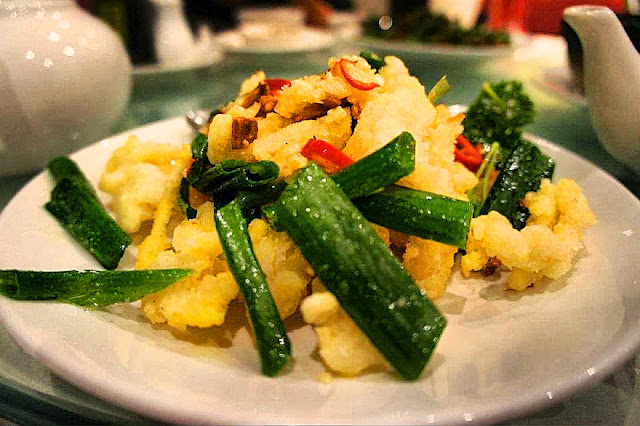 Have it all with fluffy, steamed white rice.
Also, don’t be ascared to try this if you see it on the table. 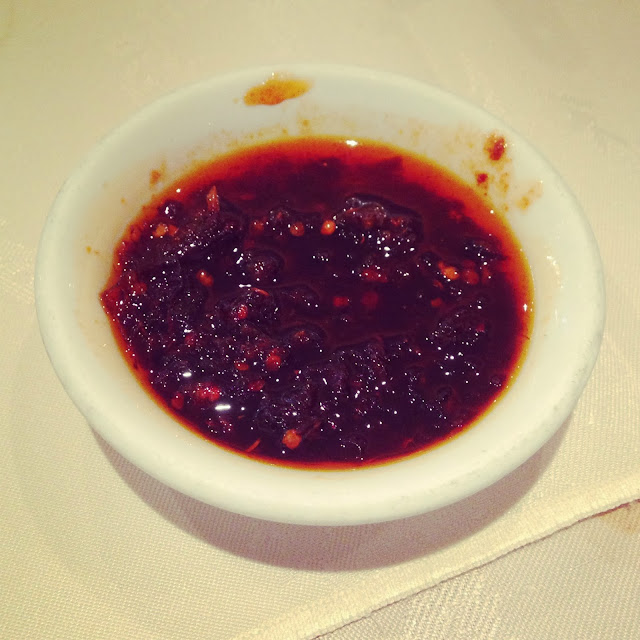 It’s chilli oil and it’s fabulous with any sort of meat, or even on it’s own, really. I told E that it wasn’t spicy because it really isn’t to me, but she found it spicy still, so maybe approach with caution if you aren’t used to spiciness.

You’ll be pretty full up at this point but just wash it all down with hot Chinese tea. I often tell people that Chinese tea is the secret to my eating stamina because it’s so good for your digestion and – or so I believe – aids detoxification. You just feel SO GOOD after it. I must say that the tea served in a lot of the Chinese restaurants in London, even at Gold Mine, is SUCH a misrepresentation of true Chinese tea. It’s usually a sad, watered-down, flavorless excuse for tea, when in reality it’s something quite extraordinary. If you know me in real life and it’s physically and geographically possible, I’ll be more than happy to pass you some Chinese tea bags or tea leaves and may you be so enlightened.


For dessert, I love the red bean pancake. This is one of my momma’s favorite Chinese desserts. It’s a deep-fried flat pancake wrapped around a smooth, sweetened red bean paste. We didn’t get it this time because the man mumbled something about not serving desserts on weekends?????? But you should ask anyway, just in case you miss out on something as delicious as this. Again, an old picture, I do apologise. 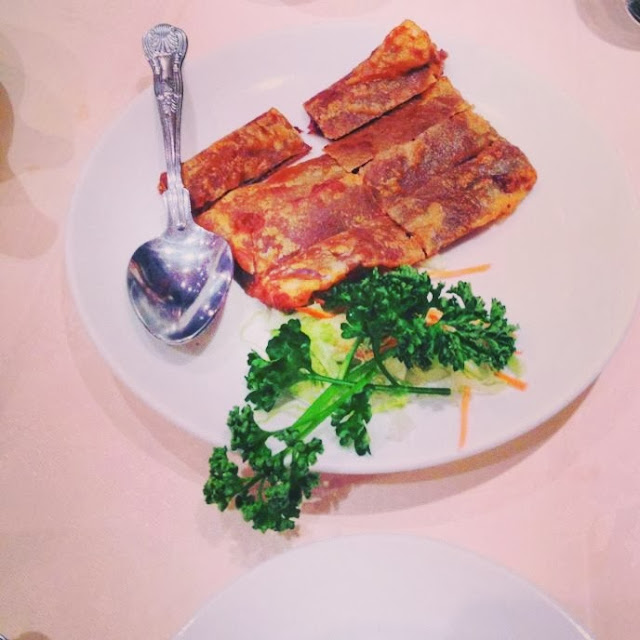 It’s slightly baffling when people tell me that Chinese food is incredibly healthy. It CAN be, but it usually isn’t.

Obviously, I’m no authority on Chinese food. But you needn’t know that. You can just assume I am correct because I can play the ancient Chinese wisdom card. In a lot of ways I am kind of like Yoda. Oh wait, he’s Japanese. Nevermind, I’m happy settling for Master Wu Gui. Not that it really matters anyway since most non-Asian people think we’re all one and the same anyway.

Anyway, if you’re craving Chinese food, do yourself a favor and mosey on down to Gold Mine, where you can waddle off a few kilograms heavier from all that duck. I’ll probably already be there.
GOLD MINE
102 Queensway
London
W2 3RR
Closest tube stations: Queensway, Bayswater
Opening hours:
12PM to 11PM daily